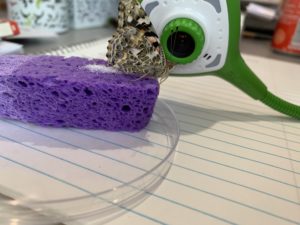 Carver Elliot Lee (@basalticcraver) has a B.S. and a Masters in Geology and is currently Resident Scientist working for the Center for Science Outreach (CSO) at Vanderbilt University (@VanderbiltCSO). One of their missions is to put formally trained scientists into k-12 classrooms and she has recently been co-teaching science with homeroom teachers at Rosebank STEAM School in Nashville to increase STEM literacy.

We heard how she loved using her HUE HD Pro camera to study butterflies and to model sub-glacial volcanoes with her students so we had to connect with her on Twitter!

This is what she said about her HUE HD Pro camera:

“When I needed a new document camera for my classroom, I knew that I didn’t want the clunky, overly large camera that my district usually provided, and as a contracted employee with my district, I have a little bit more freedom with purchases. Instead, I knew that I wanted one I had seen featured at the Get Your Teach On Conference as part of a giveaway, the HUE HD Pro. I asked my boss if we could purchase one and was delighted when she approved.

When I received my HUE HD Pro camera, I was shocked at how little space it truly took up! It was tiny compared to all the other document cameras in my school! Tiny, but at the same time, a thousand times more functional! As a science teacher, I also have a computer-based microscope I can hook up to my computer and projector, but not everything is well-suited for a microscope. In fact, most of the things I want to show my students aren’t. 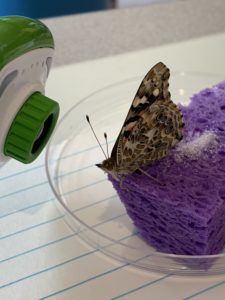 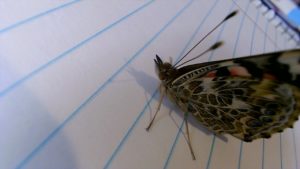 My students also love using the camera to see animals up close and personal! Nothing beats the images we were able to capture of our caterpillars and butterflies. And using the videos and still images we captured, my students were able to learn about the body parts of caterpillars and butterflies by looking directly at the animals without the possibility of injuring the animals, and without having to rely simply on drawings.

The adjustability of the neck of the camera is a complete game changer, making the camera extremely versatile. It does get a little slack after some use, but nothing that isn’t manageable. The only thing I wish was different is for the focus ring to be on the top, because when you have the lens that close to a butterfly and you’re trying to focus, you don’t want to accidentally touch the butterfly!

What’s really great about this camera is that I carried it between rooms all the time. I didn’t always teach in my own room and most of those butterfly pictures actually took place when a 2nd grade teacher called and said, ‘one of our butterflies escaped, come here!’ and I grabbed my computer and camera and raced down the hall. The size of the HUE HD Pro makes it perfect for portability!” 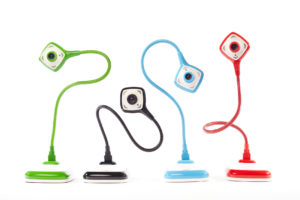 Leave a reply Click here to cancel the reply

Tweets by HUEcameras
Join Waitlist We will inform you when the product arrives in stock. Please leave your valid email address below. You will not be added to any other lists; this will be a one-time notification.